The Khalifa International stadium in Doha is a host venue of the FIFA World Cup Qatar 2022™ starting in November. The stadium’s dual arches remained intact following the redevelopment and have now been complemented by a wide canopy below which supports the stadium’s integration of the new cooling system. The new tier added 10,450 seats to the capacity (Tournament capacity 40,000), while the stadium now features a new facade. The new LED lighting system adds a new dimension to the fan experience. 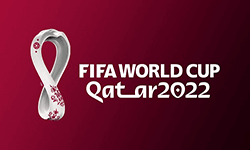 Stadium set to host matches up to and including the 3rd place match during Qatar 2022.

Built in 1976, Khalifa International Stadium has hosted the Asian Games, Arabian Gulf Cup and AFC Asian Cup. In 2019, it hosted the IAAF World Athletics Championships, along with matches during the FIFA Club World Cup Qatar 2019™. The stadium underwent an extensive redevelopment in order to prepare it for the FIFA World Cup Qatar 2022™.

How to get there

The stadium is served by Sport City Station on the Doha Metro Gold Line. The stadium lies in the heart of Aspire Zone – Qatar’s centre of sporting excellence which was the foundation of the 2006 Asian Games. The precinct is designed to drive participation in sport.